Travels in Italy, The Independent Micro-State of San Marino

Thirty years ago or so I had an aspiration to visit all of the countries in Europe.  In 1990 this was not such an ambitious target as it is now because there were a lot less countries before the break-up of the Soviet Union and Yugoslavia. Today there are fifty countries in all and as European boundaries keeps changing and new countries are being created I am sorry to say that the moving target has eluded me.

The last time that I visited a new country was in 2010 when I travelled to Montenegro in the Balkans.  In 2013 I nearly made it to Andorra but it was such a long and arduous drive through the Pyrenees that I gave up at just about the half way point and turned back to Catalonia.  Catalonia might be an independent country itself one day and I have been there already.

Now I am not nearly so ambitious and there are some countries that I realise that I really have no need to visit, Albania springs to mind, so I am sticking to the obvious places in Europe simply because there is so much that I haven’t yet seen of Spain or France or Germany or of course Italy. 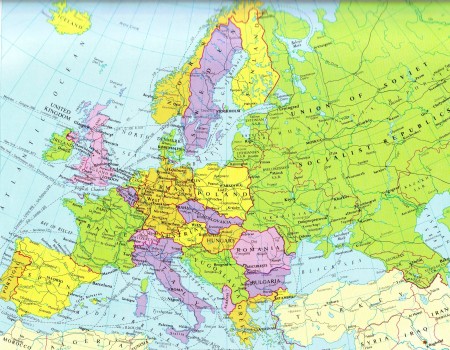 So now we were in Italy, the first European country that I ever visited, in the city of Rimini on the Adriatic Riviera and only twenty miles or so away from the independent country of San Marino and it seemed rude not to visit so one sunny morning we walked from our hotel to the bus station and purchased our tickets.

San Marino is the fifth smallest country in the World (it is .0008% the size of Australia) and the third smallest in Europe, with only Vatican City and Monaco being tinier. It is also World’s smallest Republic.  I have been to the Vatican City but not to Monaco.

Nearly fifty years ago at University I studied the ‘Unification of Italy’, it was my specialist subject, but I don’t remember it ever occurring to me to wonder why San Marino is an independent State (perhaps that’s why I didn’t get a First) and not simply a part of greater Italy because Italy is one hundred and sixteen thousand square miles of territory and San Marino is only twenty-three (.02%).  Visiting the country made me belatedly curious.

One explanation offered is that during the wars of Italian unification Giuseppi Garibaldi (he keeps cropping up) in 1849 was on the run from Austrian, French, Spanish and Neapolitan troops and sought refuge for himself and his small army in San Marino where he was given welcome and refuge.  In recognition of this support Garibaldi accepted the wish of San Marino not to be incorporated into the new Italian state and in 1862 a friendship treaty guaranteed its continuing independence.

In 1944 neutral San Marino again offered refuge to over one hundred thousand refugees and Italian Jews displaced by the Allied advance and fierce fighting in Northern Italy at the battle of Rimini.

This didn’t take very long. Being so small it doesn’t even get a mention in the Human Development Index or the World Happiness Index although I imagine that if it was included that it would do rather well in both on account of its affluence and wealth.

Being landlocked it obviously has no Blue Flag Beaches.

San Marino has participated in the Eurovision Song Contest nine times and its best performance was to finish twenty-fourth in 2014.

None of this may be very impressive you may think but for a small country (a very small country) it does have UNESCO World Heritage status which is awarded for the entire country. According to UNESCO, “San Marino and Mount Titano are an exceptional testimony of the establishment of a representative democracy based on civic autonomy and self-governance, with a unique, uninterrupted continuity as the capital of an independent republic since the 13th century. San Marino is an exceptional testimony to a living cultural tradition that has persisted over the last seven hundred years.”

San Marino used to have a Formula 1 Grand Prix but it is no point looking for the circuit because that was in Imola in Italy because this was a way that the Italians managed to get themselves two race meetings every year when other countries only had one.

Because this was Italy there was of course no queue at the bus-stop, just a disorderly crowd of people that was steadily getting larger and more excitable as we waited.  Eventually it arrived and my worst fears were realised when any semblance of order was completely abandoned and the crowd surged forward like a river breaking its banks into a flood.

Kim is much better in these crowd tsunami situations than I am and she soon left me well behind as she elbowed her way forward through the people as though she was in a rugby scrum and she was on the bus a good five minutes before I was able to squeeze myself through the door and flop exhausted into the seat beside her.

Eventually the vehicle was full and fit to burst at the seams and it pulled away from the bus stop and I began a journey to my thirty-first European country – as things stand only another nineteen to go.