Catalonia, In Search of Norman Lewis

“By the end…it was clear that Spain’s spiritual and cultural isolation was at an end, overwhelmed by the great alien invasion from the North of money and freedoms.  Spain became the most visited tourist country in the World, and slowly, as the foreigners poured in, its identity was submerged, its life-style altered more in a single decade than in the previous century.”  –  Norman Lewis – ‘Voices of the Old Sea’.

The Costa Brava in Spain…

The north east coast of Spain was first named Costa Brava by the Catalan journalist and poet Ferran Agulló  in an article published in the newspaper La Veu de Catalunya in September 1908 when he applied the name to the stretch of rugged landscape and coast which runs from the river Tordera, near Blanes, to Banyuls.

As I understand it, it is rather difficult to agree an exact English translation for Costa Brava. ‘Rugged Coast’ is most often suggested, but a Catalan will tell you that ‘brava’ is a word with a meaning that goes beyond ‘rugged’ to ‘wild’ or ‘fierce’,  even ‘savage’.

Spanish mass tourism began on the Costa Brava, a truly beautiful stretch of coastline, overlooked by the Pyrenees in the north and which wanders down the coast of the Catalan province of Girona.  Along much of its length it is a coastline characterised by intimidating crags and cliffs, nicked by tiny coves and secret bays and backed with rough pine forests stretching all the way down to the water line of the blue Mediterranean.

In preparation for visiting the Costa Brava I read the book ‘Voices of the Old Sea’ by Norman Lewis who (allegedly) spent three summers in the fishing village he called Farol and where he watched, recorded and lamented as modern tourism replaced traditional, almost feudal, rural industries and he mourned the changes that take place.

The book is an account of localised social change punctuated with humour and stories of strange Catalan customs – such the local tradition of drowning of a mouse in the first barrel of newly-pressed grapes, walking over red hot coals and jumping over babies.

It is hard to tell how much embellishment Lewis allowed himself, probably quite a lot I imagine, because he wrote the book many years later from old notes and he even neglects to mention that he travelled there in a Ford Buick with his wife and family and not as a solo traveller as he would prefer us to believe.

Slowly over the three sections of the book he explains how he integrated himself into a community that had barely changed for hundreds of years, where people adhered to tradition, superstitions ruled, and the ageless rhythms of the year continued as they had for centuries.  A feud with a neighbouring village, the patriarchs who meet in the bar, the travelling clairvoyant who predicts the best time to fish for tunny and all the details of village life are recounted in a way that is appropriate to the pace of life there.  He asks a local man to explain about life and he replies: “How can anyone put it? One thing is certain – here we have always been and here, whatever happens, we shall remain, listening to the voices of the old sea.”

But it is an affection tinged with melancholy and despair, for Lewis was observing life on the verge of headlong and irreversible change, the cork forests that were the life blood of their neighbours were suffering blight, the fish were not as plentiful as they once were and worst of all, the first waves of tourism were beginning to lap at the shores of the Costa Brava and a way of life was heading for extinction.

In the 1950s, the Costa Brava was identified by the Spanish government and by local entrepreneurs as being a coastline suitable for substantial development as a holiday destination to compete with the south of France and mainly for package holiday tourists from Northern Europe.

It was a sort of perfect ‘Surf and Turf’ with a combination of a very good summer climate, a green environment, excellent beaches and a favourable foreign exchange rate.  This made Spain a relatively inexpensive tourist destination and this was exploited by the construction of large numbers of hotels and apartments in such seaside resorts as Blanes, Tossa de Mar, and Lloret and in a relatively short space of time tourism rapidly took over from fishing as the principal business of the area.

Lewis recalls his time there to describe the poverty-stricken and almost medieval lifestyle of the fishermen and their families. During the second season a dubious local businessman opens a hotel and begins the gradual transformation of the village into what he considers to be a tasteless tourist trap in spite of resentment and resistance and the fishermen who continue obstinately to fish the dwindling stocks even when it is pointed out that they can earn far more taking tourists on a single boat trip than in a whole season of fishing.

By the third season there is no turning back – the fishermen’s wives are working as chambermaids at the hotel, and even Lewis’s friend Sebastian has had to abandon his ambitious travelling plans and become a waiter.

Muga’s bribery and manipulation, at least in his own mind, are benevolent, even visionary. He aims to modernize the region and turn Farol into a tourist attraction, complete with seafront hotels and shops filled with flamenco dresses and Cervantes figurines – in other words, souvenirs from the complete opposite side of Spain, souvenirs that have no connection with Catalonia or the Costa Brava. On account of this rapid transformation Lewis sadly laments that “Farol began its slow loss of identity.” 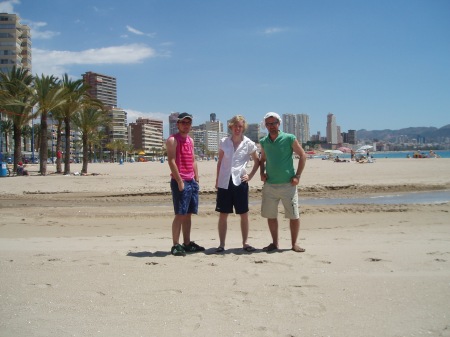 Norman Lewis and the Bluff of Farol…

There is actually no such place as Farol (farol means bluff) because if he possibly could, Lewis, in a selfish sort of way, wanted to retain its anonymity, he didn’t want his description of an idyllic fishing community to contribute to the flood of tourism that he thought would destroy it.

This was all rather pointless of course because by the time he wrote the book the changes had all taken place and there is a wide streak of vanity running through this objective because once started nothing was going to stop the ever increasing flow of pasty faced tourists from the north.

Given how much Spain’s Costa Brava had changed already by the time Lewis was writing, Voices of the Old Sea is devastating in its understatement. Refraining from overtly referring to the full extent of the later transformation of the place that Lewis was painfully aware of he lets us fill in the blank sequel ourselves with the shocking knowledge we already have about the impact of the northern invasion.

The truth is that it may not even be based on anywhere in particular and many people have tried to identify the fishing village of Farol and I am going to have a try as well.

I am fairly certain that the village is on the Bay of Roses which leads me to chose between Roses in the north and L’Escala in the south.  I have discounted Cadeques because this would have been just too remote.  The nearest big town is almost certainly Figueres so I have concluded that it must be Roses.  Lewis doesn’t give away many clues and most people agree that a lot of the content of the book is simply ‘made up’ but I submit two other pieces of evidence to support this theory.

Lewis tells us that the village priest Don Ignacio has a passion for archaeology and likes to visit the Roman ruins at Empurias and he visits the site by taking the bus.  Now, Empurias is close enough to L’Escala to walk but is thirty kilometres from Roses so would almost certainly require transport.  Secondly, Lewis calls the neighbouring village Sort and tells us that it is five kilometres from Farol and lying conveniently five kilometres from Roses is the modern town of Castelló d’Empúries, which I suggest is the village Lewis calls Sort.

As secondary evidence I suggest that the name of the entrepreneur who wishes to drive the transition to tourism is taken from a local feature – his name is Mugo which is the name of the river that flows through Castelló d’Empúries and empties into the Bay of Roses. As his influence grows Lewis tells us that Mugo buys new property that is regarded as useless marsh land through which a river flows and this little snippet is not completely irreconcilable with the development of such land south of Roses which was to become the modern day marina of Empuriabrava.

Read my story about Benidorm in the 1960s here.

33 responses to “Catalonia, In Search of Norman Lewis”