On This Day – The Dad’s Army Museum in Thetford

Even though travel restrictions are easing I am not yet minded to risk it so I still have no new stories to post so I continue to go through my picture archives and see where I was on this day at any time in the last few travelling years.

I visited the Norfolk town of Thetford a year earlier but didn’t do my research properly and the Dad’s Army Museum wasn’t open.  The simple reason was that it is run by volunteers who, unlike me,  have jobs to go to during the week and only opens on a Saturday so this year I made sure that we went there on the right day.

Dad’s Army was an English situation comedy which was first broadcast in 1968 and fifty years later remains one of the funniest, often repeated and most popular of all BBC programmes.  I am a huge fan and will happily sit through endless reruns of the shows.

Kim is not so keen I have to tell you.

My plan was to stay in a hotel called the Bell Inn because  the cast of the show used to stay here fifty years ago and I wanted to stay there too.  I hoped I might get lucky and get the very room that Captain Mainwaring (Arthur Lowe) used to sleep in.

Sadly the Bell Inn turned out to be a massive disappointment, yes there was some Dad’s Army mementoes hanging on the walls but the place was a complete dump and the room we were allocated was tired, uncared for and dirty.    A real shame, I was so looking forward to staying there but I had to agree with Kim that it most likely hadn’t been decorated or cleaned since Arthur Lowe himself slept there in the 1960s.  Kim refused to stay and sent me to reception to get a change of room.  I was told that this was not possible so we decided to leave immediately.

‘Dad’s Army’ is set during the Second World War and is a story about the British Home Guard which was a amateur defence force army made up of local volunteers otherwise ineligible for military service either because of age (hence the name “Dad’s Army”) or by being in professions exempt from conscription.  Their job was to defend Britain against a German invasion force of Panzer Tanks and battalions of crack Wehrmacht troops. This was most unlikely and is the real basis of the whole series of programmes.

The show called the fictional town they defended Walmington-on-Sea which was said to be on the south coast of England but it was actually filmed in Thetford in East Anglia.

The little museum turned out to be a real treasure store, crammed full of memorabilia relating to the series, pictures, video clips, scrap books, newspaper articles and pictures and photographs of all the stars.  Kim is not such a big fan of Dad’s Army as I am but enjoyed this place just as much as I did.  We stayed longer than expected and then finished with a cup of tea and a cake at the Marigold Tea Room which is a recreation of one of the sets famous from the series. 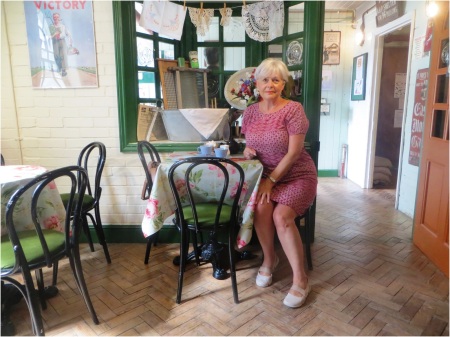