My Personal A to Z of Spain, A is for Almagro

The hotel that we were staying at was the Hotel Retiro del Maestre, a renovated old Spanish nobleman’s house on a street leading to the main square.  It was a friendly family run hotel with spacious and comfortable public rooms, a large outside terrace basking in the sun and ours was a nice room with a view over the garden.

It was late afternoon by this time and with the sun beginning to dip we didn’t linger long but made our way quickly to the Plaza Mayor.  On the way we passed by the equestrian statue of the Conquistador Diego de Almagro and into the rectangular Plaza, a hundred metres long and forty metres wide and flanked on both sides by arcades of Tuscan columns supporting overhead galleries all painted a uniform shade of green and fully glazed in a central European style which makes this place unique in Spain.  These galleries were originally open and used as grandstands for public events, religious festivals and even bullfights that were held here until 1785 when they were finally banned by King Carlos III.

We choose a table on the sunny side of the Plaza, ordered beer and wine and just sat and watched the activity while we scoffed the inevitable olives.  The bar owner shooed away some small boys playing football, telling them to play elsewhere and families began to arrive and the bar quickly filled up with chattering customers.  Walking around the square was a proud grandmother pushing a young baby in an immaculate pram which matched her pristine outfit and she completed at least a dozen circuits, stopping frequently to chat and to show off the small child to anyone who showed the remotest interest.

After a second leisurely drink we paid up and left the square and strolled back to our hotel where we asked for some dining recommendations and the receptionist convinced us to go to her favourite just a couple of streets away so after we had rested and changed we took her advice and found the restaurant in a side street off the main square.

Although it wasn’t especially late when we finished the meal, we were tired after a long day that had started three hundred kilometres away in Mérida, taken us to Trujillo and then a three hour drive to Almagro and we were ready for bed.  We walked back through the Plaza Mayor that was lively in a subdued sort of way (if that makes sense) and then to the street to the hotel.  About half way along we heard Spanish guitars and the clack of castanets and we wondered where it was coming from and then through the pavement level window of a cellar we could see a dancing class in full swing.  Some local people suggested that it would be perfectly alright to go inside and watch so we did just that and before the lesson ended we enjoyed fifteen minutes of genuine Spanish music played by a sort of flamenco skiffle group and a group of young people dancing in true Castilian style.

It was a great way to end the evening!

After four days of travelling, eight-hundred kilometres and some serious sightseeing, today we were planning an altogether less demanding sort of experience with a leisurely full day in the provincial town of Almagro.

Almagro is an old town that was once much more important than it is today, two hundred and fifty years ago it was for a short time the provincial capital of La Mancha (1750-61) but religious decline set in during the reign of Charles III and it fared badly and suffered damage in the Napoleonic and the Carlist wars.  Eventually it was eclipsed by its neighbours, Ciudad Real and Bolaños de Calatrava and it became the quiet town that it is today on, not being unkind, a secondary, less important, tourist trail.

Talking of trails, as we stepped out into the street we were now inevitably on the ‘Ruta de Don Quixote’, which is the golden thread that binds the Castilian tourist industry together in a ribbon of towns, castles and windmills stretching from Cuenca to Toledo.

The historical centre of Almagro is conveniently located inside a circle of modern roads so this morning we sort of circumnavigated it all as we walked through surprisingly wide and airy streets with the ubiquitous boxy white houses with little balconies and ornamental black iron grills over the windows where much of the town has been redeveloped to accommodate modern living demands.  Along the route there were churches, a wide open park and a convent, now converted to a Parador hotel.  We went inside to take a look but Parador room and menu prices are not really for us so we weren’t tempted to stay and instead made our way back to the Plaza Mayor for the final piece of sightseeing.

This was the Corral de Comedias, which is a sixteenth century theatre, similar to those that Shakespeare would have been familiar with in Elizabethan England, built in what was the courtyard of an Inn and which today is the only fully preserved example of a theatre of this type in the World.  It is a working theatre still and inside it is an immaculate example of a theatre of the golden age, built on three levels with galleries and private boxes running around all three sides of the open courtyard.  It was an unexpected little gem but it didn’t take long to walk around and listen to the audio commentary so after we had finished we stopped for a while and compiled a shopping list of souvenirs that we could confidently carry back in our hand luggage and agreed on some local pottery and some water colour postcards of the main sights of the town.

It had been a good day in Almagro and after dinner and before returning for the final time to the hotel we strolled one last time through the Plaza and had a final drink in a busy bar that was full of extended Spanish families all starting the weekend here in the square.  It had been a quiet day but we had enjoyed the rest. 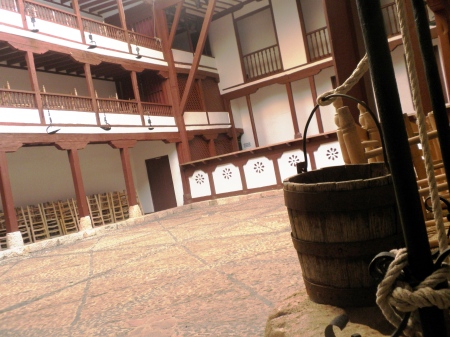 A is for Almagro but it could well have been:

10 responses to “My Personal A to Z of Spain, A is for Almagro”