Around the World in Eighty Minutes – Part Four, Germany 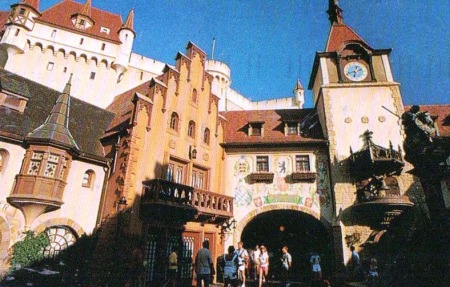 Continuing my comparison of EPCOT World Showcase with the real thing the next destination is Germany where, sad to say, EPCOT was my first visit to this country. Since this time however I have been to Bavaria, Friedrichshafen and to the Black Forest and although the Disney version is very picture book it seems to me that there is some creditable degree of accuracy in it.

EPCOT of course isn’t going to recreate the industrial cities of Dusseldorf or Frankfurt any more than it is likely to do Detroit in the US or Manchester in the UK but rather sets out to create the perfect German experience and describes it like this:

“The Germany Pavilion is a cultural area where Guests of all ages can experience the lively charm of a quaint German village….  Enter a charming cobblestone plaza designed after a 16th-century German town. A variety of shops, a clock tower and a fountain with a statue of St. George slaying a dragon lie within the castle walls. The oom-pah band music and elaborate German architecture make you feel like you’ve stepped right into the pages of folklore”

A busy market place is the centre piece of the cobblestoned German Pavilion where the architecture reflects a diverse cross section of regions, from the replica of the medieval castle to the fairy tale Bavarian style buildings and a clock tower that features a glockenspiel that chimes a Disney melody on the hour.  There is one part of the attraction where I can make a direct comparison because Das Kaufhaus in Disney is modelled on a real building in Freiburg which I visited in 2011 in the snow.

Disney’s version of Germany has pastel coloured buildings, carved balconies and timbered turrets and of all the places that I have visited in real Germany it reminded me most of Heidelberg where the market place was another of those German picture book town centres with half timbered medieval buildings painted in gay colours surrounding an immaculate cobbled square with a central fountain and statue.  On the northern side and facing the sun there were restaurants and cafés with pavement tables and chairs so we selected one and sat in shirtsleeves in a surprisingly strong February sun and we had a coffee and a beer and watched the World go by.

In the Disney shops and restaurants the staff wear traditional German clothing and in Berchtesgaden in 2008 I found it interesting how real Bavarians people were quite prepared to wear traditional clothes in a completely unselfconscious way and at one point we saw a young lad of about fourteen in full lederhosen and braces, felt hat and cape and I wondered how difficult it might be to get a fourteen year old in England to walk around the streets dressed like that.  To be fair it wouldn’t be right to expect it because he would surely be beaten up within fifty metres of leaving the house.

I have given this matter some thought and I have decided that, for today anyway, my favourite place in Germany is the village of Schiltach in the Black Forest which seems to me to represent faithfully everything I imagine Germany to be.  On a visit there we parked the car next to the river near the tanner’s quarter which is the oldest part of the town.  Here the timber framed buildings were built at the side of the Kinzig in the eighteenth century and were used by the tanners in the production of especially high quality leather goods, which the town was once famous for.

From the river to the Städle or Old Town where every building was half timbered with colourful facades and brightly painted wooden windows that created a fairy tale atmosphere.  If Disney needs inspiration then it should come here because there was simply nothing to spoil the picture book mood and character and in the pretty triangular market place at the heart of the town the fasnacht festival bunting hung high above the cobbled street and old town well, the merchant’s houses and the town hall with its striking Teutonic wall paintings.

Just behind the main street there was a warren of tiny crooked streets surrounded on all sides by the most picturesque half timbered buildings and it was almost possible to imagine that we had wandered into a secret fairy tale village of uneven cobbled streets, colourful houses and cottages and might at any moment meet Little Red Riding Hood or Hansel and Gretel just as at EPCOT where you bump into Snow White.

2 responses to “Around the World in Eighty Minutes – Part Four, Germany”