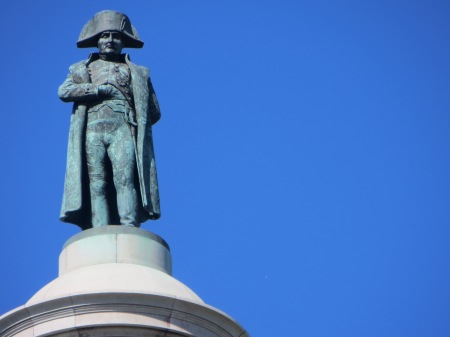 It marks the location of the base camp where Napoleon  assembled an army of eighty thousand men all reeking of garlic, impatient and ready to invade England.  It was initially intended to commemorate a successful invasion, but this proved to be rather premature and as he didn’t quite manage that it now commemorates instead the first distribution of the Imperial Légion d’honneur.

Originally, when it was first completed, the statue had looked out over the Channel towards England, the land Napoleon had confidently expected to conquer but after the Second World War, the French government turned the statue of Napoleon round to face inland, as a mark of respect to the British allies in the war and as a symbolic gesture that never again would France break one of the ten commandments and covet its neighbours property.