“… but God’s magic is still at work and no matter what the race of man may do or try to do, Greece is still a sacred precinct – and my belief is it will remain so until the end of time.” – Henry Miller, ‘Collosus of Maroussi’

Leaving Tinos the Blue Star ferry made its way to neighbouring Mykonos where we would be spending the last two days of our trip before flying home.

Usually we choose to stay in traditional accommodation with average prices but for the last two days we had selected instead to stay at a more expensive boutique hotel just outside the Chora.  Actually, it wasn’t that expensive just a bit more than we like to pay and the result was that we were allocated a very nice room with a balcony and a Jacuzzi and a glorious view over the town and the bay.

By comparison the mini-bar and restaurant prices were ludicrously astronomical so it didn’t take us long to make a decision to take a walk back into the centre for an afternoon stroll, search for a sunset and then find a reasonably priced taverna for evening meal.

Now at the end of our holiday we challenged each other to record the highs and lows of the three week trip.  We didn’t agree entirely with each other but I think this list of highlights is safe enough to share…

The list complete we thought about our last day and agreed that it might be a good idea to try and break our walking record and see if we could crash through the ten mile barrier so we decided to start early and walk to Ornos where we had stayed two weeks previously and then on to Agios Ioannis and then return. 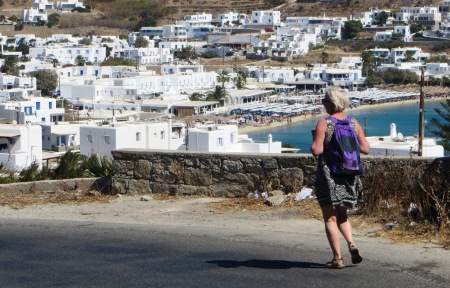 So, next day we did just that and immediately after a rather chaotic hotel breakfast we packed our rucksacks and set off.

It was late October now and the scorching summer weather was on the glorious tipping point into Autumn and there was a welcome breeze, well, wind actually, which made it a pleasant walk to the south of the island.  Once there we thought about a swim in the sea but the beach was still crowded with sun-worshippers cluttering up the beach so we passed straight through and on to Agios Ioannis where we stopped to swim for the last time this year and then to have a drink before retracing our steps stopping in Ornos on the way for a light lunch.

The taverna was next to the bus stop and there a middle-aged shabbily dressed American with grizzled grey hair and an extravagant pony tail was giving Greece travel advice to a younger woman who had admiring doe eyes and was hanging on to his every word as though he was Ernest Hemingway or Henry Miller or Rick Steves.  Some of the advice was quite useful as it turned out but it dried up when the bus arrived and they climbed aboard and left.

We left shortly after and walked the two miles back to the hotel where we sat in the sun, arranged our suitcases ready for the journey home and enjoyed some time in the Jacuzzi. 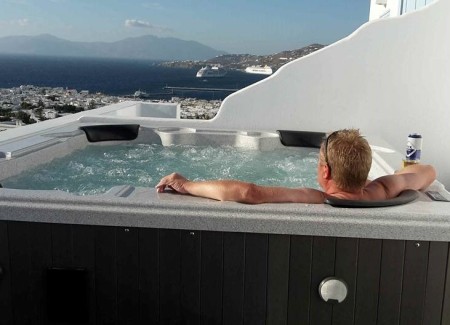 For evening meal we had chosen a beach side taverna a little way out of the town (we needed the steps) and we presented ourselves at the agreed time of eight o’clock.  It was a busy restaurant and we were obliged to share a table with a couple from France who arrived shortly after us and were both clearly very drunk.  They ordered several starter plates and a bottle of retsina and then nibbled at the food and got seriously stuck into the wine.  They were generous with their food and invited us to share but I noticed they didn’t offer any wine.  They ate almost nothing but very quickly ordered a second bottle.

As we ate the American and his adoring companion walked by and although I am certain they had only recently met they were now holding hands.

It was a good meal, perhaps the best of the holiday? I don’t know, I can’t really be sure, but we enjoyed the musicians who played traditional Greek music throughout the evening and the amusing company.  He danced, she chatted, they were clearly local celebrities and when it was time to go we said goodbye and as we left they ordered their third bottle of retsina! 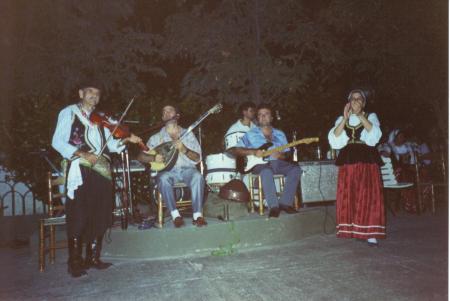 We walked back and saw the American and his friend who were now walking arm-in-arm – the old man of the sea had clearly been hooked.  Back at the room we checked the pedometer – 10.35 miles, we had broken our record and we were self-congratulatory about that.

On the final morning I was surprised to see no cruise ships in the harbour or the bay so anticipating that this might make a difference I made a final visit to the town.  It was charming, empty, quiet, unhurried and delightful.  Without hordes of cruiser invaders the little streets of the town had a whole different ambience and improved quality.  I liked it so much I did at least two full circuits of the town and I was so happy to see it like this in the last few hours before returning back home.

We had enjoyed the Cyclades and agreed that we certainly wouldn’t leave it another five years before returning to one of our favourite places. 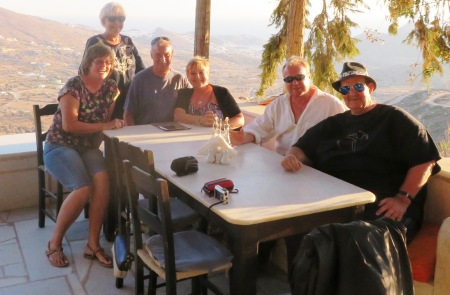 22 responses to “Greek Islands, Final Days and a Last Walk”