Travels in Spain, Toledo The City of Religion and Steel 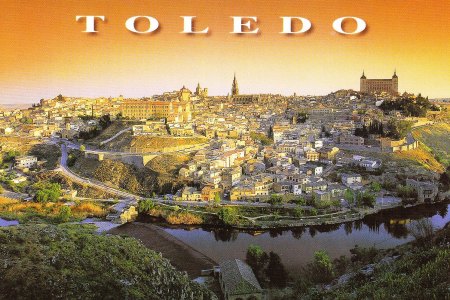 “A castle stands sentinel across the stream; harsh grey hills are all about: the setting of Toledo is all abrasion, nothing soft, nothing hospitable, nothing amusing.  This is the Spanish character at its most intractable” –  Jan Morris – ‘Spain’

The car park might have been conveniently right on the edge of the City but to get there involved a rather strenuous climb to reach it because old Toledo is built on the top of a craggy outcrop of rock which sits like a Stork’s nest that in the Middle Ages made it impregnable to hostile forces.

The whole city is a sort of natural castle with a moat, the Tagus River, running in a looping gorge around three sides of it. The only way an enemy could take it was to attack the north side and that was difficult because not surprisingly that was the most strongly fortified part of the city walls.  The Tagus, by the way, is the fourth longest river in Western Europe and the most important in Iberia and from Toledo it flows all the way to the Atlantic Ocean at Lisbon in Portugal.

Toledo has always been one of the most important cities in Spain and for many years actually contested the status of capital with nearby Madrid and was in fact the principal city until 1560.  But Madrid gradually came to prominence under the Hapsburg Monarchy and Phillip II moved his court there and made it his Capital in 1561.

Toledo compensated for this by reinventing itself as the principal religious city in the country and today remains the seat of the Primate of all Spain.  To walk around the cramped streets of Toledo and browse the souvenir shops is the closest you can get in Spain to being in Rome as replicas of the Saints stare out from every shop window.

This to is the city of El Greco, the greatest artist of his age and his religious paintings and his interpretations of the scriptures that represent Toledo as a brooding cauldron of spiritual energy are never far away. 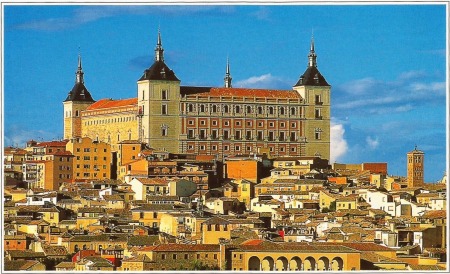 At the end of the climb from the car park we entered the city at the busy main square, the Plaza Zocodover, which was surrounded by tall imperial buildings and confusing little streets leaking away into deep shadows in all directions.  Without a map we were rather confused and disorientated because this was easily the biggest place we had visited so far.

After a while we established our bearings and walked to the Alcázar, which was closed today for improvements and a planned new museum but being at the top of the city did have spectacular views over the river and the lands stretched out to the south.  We were still unsure of our location and after an aborted refreshment stop at a bar with a broken loo and unacceptably loud music we threaded our way into the maze of narrow streets and walking in the general direction of the Cathedral.

After lunch we walked to the Cathedral and paid the entrance fee of €7, which turned out to be excellent value compared to the €2 to get into the tiny church in Belmonte.  It is one of the biggest cathedrals in the world and the interior is not at all austere as some cathedrals can be.  Slightly annoying was the fact that for those who didn’t want to pay the admission charge they could enter by a side door and although they couldn’t walk around freely and see all of the internal rooms and the especially impressive choir area, they could certainly see and appreciate the magnificent structure for free.

Outside the Cathedral we found a tourist information office and now we had a map the city was suddenly much easier to negotiate.  In the past Toledo had changed hands many times and it was renowned for its diversity and religious toleration and we visited a synagogue with, unusually for a synagogue, free admission and then after walking through a warren of mazy streets came out on the other side overlooking the modern town to the north.

Every available square metre of this rocky outcrop has been built upon and the buildings are heaped together in a random and haphazard way with cobbled lanes revealing new delights at every twist and turn.  We negotiated the narrow confusing streets and the surprises back towards the Plaza Zocodover and as we did so passed through an area of artisans workshops where metal workers were making swords and knives and displaying them in the windows. 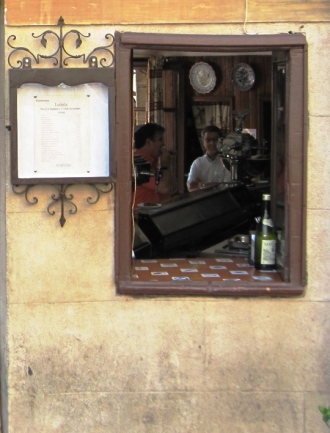 Traditionally Toledo (like Sheffield in England) is famous for its production of steel and especially of swords and the city is still a centre for the manufacture of knives and other steel implements designed for stabbing people.  In the tourist shops slashing swords and dangerous daggers compete for selling space with the holy Saints and religious icons.

For soldiers and adventurers in past times a sword made of Toledo steel was a must have item because the quality of the steel and the skill of the blacksmith combined to make an exceptionally strong and perfect lethal weapon.  In literature and film the Three Musketeers had Toledo steel swords and so did Don Diego de la Vega who was more famously known as Zorro.

The manufacturing process was a carefully guarded secret and to make such an exceptional weapon they had to select the very best raw materials and then follow a complicated technical process to achieve the right balance between hard and soft steel forged at a temperature of 1454º Fahrenheit for exactly the right length of time and followed by a critical cooling and shaping process.  So complicated was this whole procedure and so perfect was the finished weapon that to achieve this level of precision a master craftsman would typically only be able to make two or three blades in a year.

Little wonder that they were so expensive!

40 responses to “Travels in Spain, Toledo The City of Religion and Steel”