Weekly Photo Challenge: On The Move

Being twelve and ten years old respectively Sally and Jonathan desperately wanted a ride on an inflatable dinghy dragged at high speeds through the water by a speedboat.  I resisted this until the end of the holiday but on the penultimate day reluctantly agreed to take them on the ride.

Malta – A Banana Boat and a Near Death Experience

On this visit to Malta the weather was gloriously perfect and our sightseeing trips to the historical sites were punctuated with lazy days at the hotel swimming pool or on the beach.  One such visit however turned out to be more dramatic than we really needed because this was the day of the near death experience.

Being twelve and ten years old respectively Sally and Jonathan desperately wanted a ride on an inflatable dinghy dragged at high speeds through the water by a speedboat.  I resisted this until the end of the holiday but on the penultimate day reluctantly agreed to take them on the ride.  Joining us on this holiday was thrill seeking cousin Janice who was also determined to accompany us for the experience so we paid our money, put on our buoyancy vests and clambered aboard the red beast and when we were all safely clinging on the motor boat engine coughed out a ball of fumes, throbbed into life and eased away from the safety of the concrete mooring and began to gather speed.

It was great fun as the boat reached top speed and the inflatable bounced over and through the bubbling wake of the motor boat in front, throwing up spray and foam and soaking us from head to toe.  Now, the whole point of this ride is that at some point the thing is going to capsize and we were going to be thrown into the sea and at a safe distance out the boat driver made a tight turn which ensured that the dinghy would snap back on the tow rope and deposit all the riders into Davy Jones’ Locker and sure enough in a split second we were all bobbing about like corks on the surface of the Mediterranean Sea.

The boat returned and pulled the dinghy up alongside and now we had to get back on board which turned out to be a lot easier said than done!  It had been simple to get on when it was tied up at the jetty but now we were in the water and had to haul ourselves up about a metre or so to resume our seats.  Sally and Jonathan managed it effortlessly of course but I struggled a bit on account of being older, heavier and only having little legs.  It was all rather undignified but eventually I managed it with the assistance of the children.

Janice was not so lucky.  I am only about five foot six and this was the reason I struggled but Janice barely make five foot so she was quite unable to climb back on.  She stuck a left leg out of the water and hoisted it into the air but failed and then a right leg in case this might be a bit longer and more succesful but it was obvious that there was no way that she was going to get sufficient height or leverage to clamber back on and there was no way either that we could pull her out of the sea which seemed all the while to be sucking her back in like quicksand! 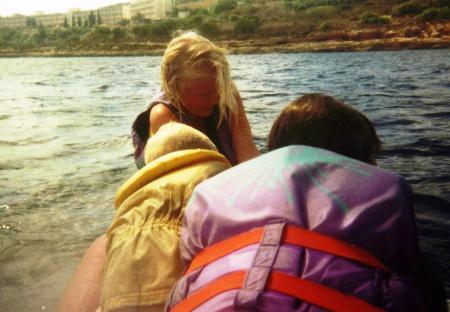 By this time the boat driver was getting rather impatient and was rather unsympathetic to her predicament and this made Janice panic and then she declared that it was all hopeless and swam to the boat instead where she clung like a limpet to the back of it with exposed legs perilously close to the propeller blade and sucking in fumes from the exhaust from the engine as she gasped for breath.

She was in a right state by the time the driver managed to pull her out of the water, coughing and spluttering and spitting out about a litre or so of sea water.  He sat her down in the boat and continued the ride and in our euphoric state we rather unkindly forgot all about Janice and her traumatic experience until the ride finished.

Back at the jetty Janice was still in a state of shock, trembling all over and going an unhealthy shade of grey as her copper sun tan evaporated in front of our eyes and although we thought this rather selfish we had to leave the beach after a few minutes and return to the hotel so that Janice could recover with dignity in the privacy of her room.

After a couple of hours there didn’t appear to be much improvement and worried about the amount of bureaucratic documentation there would inevitably be if she died we decided that despite the expense it would be best to call a doctor.  We are still undecided whether this was genuine or just a bit of attention seeking but the doctor arrived, checked her over, gave her some tablets and advised the use of a wheel chair for the rest of the day which promptly arrived courtesy of the hotel and we reluctantly took it in turns to push her around all evening.

I have never been on a banana boat again after that and I am prepared to wager rather a large sum that Janice hasn’t either!