“What I saw in Barcelona – Gaudí – was the work of such strength, such faith, of an extraordinary technical capacity, manifested during a whole life of genius; of a man who carved the stones before his eyes in well thought out pattern…. Gaudí was a great artist; only those who move the sensitive hearts of gentle people remain” – Le Corbusier (Swiss-French Architect)

The first day in Barcelona had been a rapid breakneck tour of the city that raced recklessly through history, culture, sport and sights without any real plan or semblance of sensible order.  Today we intended to be more focussed and specifically we were going to visit the buildings of the renowned Catalan architect Antoni Gaudi.

Antoni Plàcid Guillem Gaudí i Cornet (to give him his full name) was an architect who belonged to the Modernist Art Nouveau movement of the early twentieth century and was famous for his unique style and highly individualistic designs.  We had already come across some Gaudi creations previously on our travels, the Casa Botines in León and then El Capricho in Comillas but Gaudi didn’t do a lot more work outside of Catalonia so to see his work properly then it really has to be in Barcelona where he was prolific.

Whilst leaving his indelible mark specifically on this city at the same time he contributed his architectural legacy to the heritage to the World in general.

I mentioned before that the bus tour had taken us along the Passeig de Gràcia in the Eixample district of Barcelona heading for the Casa Milà when one particular building had caught our attention.  It turned out to be the Casa Batlló and so this was the building that we headed towards first of all.

Gaudi designed Casa Batlló in a prosperous middle class district of Barcelona for a wealthy city Aristocrat who was carrying out a complete refurbishment of the property that had originally been built in 1877.

It is a unique and fabulous building that defies any sort of description and is a place that really has to be seen to be fully appreciated.  From the road outside the building looks stunning and the local name for the building is ‘casa dels ossos’, literally the house of bones, and the building has a visceral, skeletal, organic quality.  Much of the façade is decorated with a mosaic made of broken ceramic tiles that begins in shades of golden orange and moves and merges harmoniously and without effort into greens and blues.

It is a wonderful riot of style and outrageous architectural ideas and designs and stepping inside is like being given the privilege of sharing the inside of the mind of a genius.  Every room is a treasure store  and the attention to detail is immaculate.  The ground floor, in particular, is rather astonishing with tracery, irregular oval windows and flowing sculpted stone work.  It seems that Gaudi’s objective was if possible to avoid straight lines completely.

My favourite part of the building was the roof with its forest of coloured chimneys decorating a terrace which is arched and is said to represent the spine of a dragon.  A common theory about the building is that the rounded feature to the left of centre, terminating at the top in a turret and cross, represents the sword of Saint George the patron saint of Catalonia, which has been plunged into the back of the dragon.

After we left Casa Batlló we walked the short distance to the next Gaudi masterpiece, the Casa Milà and paid our entry fee to visit the exhibition rooms and the roof with its sculptured chimneys and ventilation shafts.   Casa Milà reminded me of the slopes of a volcano, flowing layer upon layer like Mount Vesuvius and with more curves than Marilyn Monroe.  I have to say that it didn’t excite me as much as  Casa Batlló but once again I liked the roof with its decorated chimneys and from where there was a good view of the city and a clear line of sight towards our third intended visit – the Sagrada Familia. 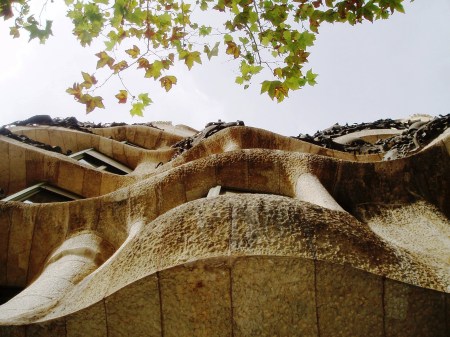 It was quite pricey to get in but then I had to take into consideration that this is the principal source of fund-raising because the long drawn out construction is not supported financially by any of the National State of Spain, the Autonomous Community of Catalonia, the Province or City of Barcelona or the Catholic Church (it already has one Cathedral, why does it need another?)

Work on the Cathedral began in 1882 and  is currently due for completion in 2026 and although I say long drawn out and nearly one hundred and fifty years may seem a very long time, to put this into some sort of perspective, you can’t really expect to build a cathedral in just a couple of years.

So we purchased our entry tickets and went inside into a surreal world of a combination of church and building site with stone and brick side by side with pews and confessional boxes and we wandered around the great nave and the side chapels and then made our way to the entrance to the lift that would take us to the top of the twin towers soaring high above the half-finished building and which took us closer to the stone carvings, the allegorical friezes and the sometimes curious selection of material used in the construction.  Reaching the top the bonus was a glorious view over all of Barcelona with a riot of colourful but not especially attractive boxy buildings leading all the way down to the Mediterranean Sea. 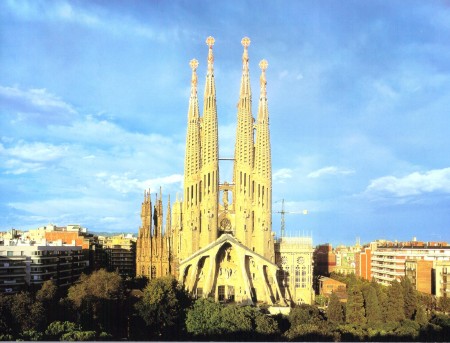 Down again at ground level we walked through the forest of scaffolding to the main doors and then left taking time to admire the sculptured nativity scene in its prominent position between doors and spires.  At first glance this all seems rather chaotic but with its avoidance of straight lines and right angles, and its forest-like columns of trees, it embodies Gaudí’s belief that construction should follow the example of nature.

The fluidity of the design creates the illusion of fusion – columns and arches melt into a viscous panorama that foams, drips and provides refuge for plants, animals and people and as we stood and admired it I hoped that although it is difficult to get inside the mind of a genius that I might at least be able to understand just a little of what it all meant.

And so our day of architectural sightseeing drew to a close, we knew all about Gaudi, hadn’t been robbed and later we went to the same restaurant where they remembered to charge us for the wine this time but to compensate for this forgot the beers.  I liked this place so it was a shame that this was the end of our time in Barcelona and tomorrow we would be leaving for Girona.

Click on any image below to enter the slideshow… 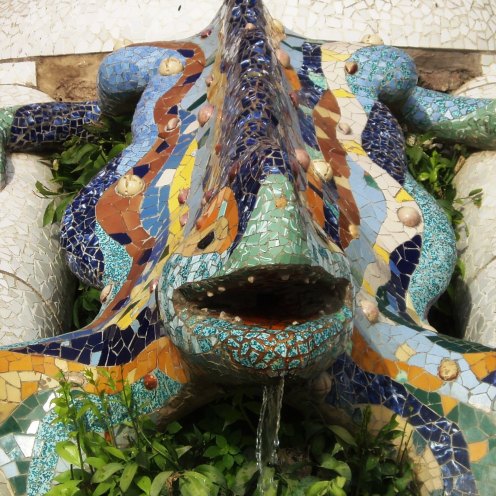 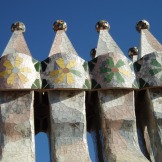 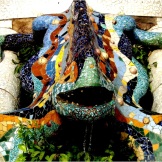 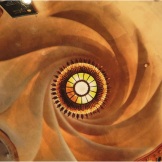